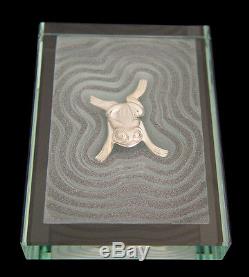 Bill Reid's original 22k gold Frog pin was executed in 1971, using the repousse technique. It is now on permanent display at the Museum of Anthropology, University of British Columbia in Vancouver.

A mold was made from the original from which an open edition casting was made in sterling silver. Each silver Frog is finished by hand and stamped with the artist's crest,'the wolf' hallmark, on one foot. When not worn, this rare piece by Canada's most famous Aboriginal artist floats on a sandblasted glass pool designed and crafted by John Nutter.

John Nutter worked closely with Bill and created many glass elements for him in the 1990s. The brooch measures 1 1/2" x 1 1/4" and the lily pad measures 4" x 3". William Ronald Reid was a world renowned sculptor and is now regarded as one of Canadas finest artists. Bill Reid was also a descendant of the great Haida carver and silversmith, Charles Edenshaw. Bill did not elect to study art in high school, but he did recall a young substitute teacher, Jack Shadbolt, who read poetry and introduced Kandinsky-style drawing to his class of 8th graders.

Bill Reids adult career surprisingly began in broadcasting as a radio announcer. His deep, resonant voice and clear use of English took him to a variety of stations including ten years with the CBC in Toronto and Vancouver. While Bill was working on Toronto, two events proved to be formative to his career as an artist.

He studied jewellery making at the Ryerson Institute of Technology, and he became acquainted with the collection of Northwest Coast Native art in the Royal Ontario Museum. Of particular interest to him was a great pole from his mothers ancestral village, Tanu.

It was during this time that Bill began to explore his cultural heritage and the art of the Haida people. Before he left the CBC in 1958, Bill wrote and narrated a television documentary that explored salvaging the last totem poles of the Queen Charlottes. He also narrated a film documenting the People of the Potlatch exhibition at the Vancouver Art Gallery. Soon after his arrival, he was engaged in a four year task to recreate a section of a Haida Village for the University of British Columbia. This task was the turning point for Bill Reids incredible artistic career that saw him produce remarkably intricate jewellery, large sculptures, drawings, and silkscreen prints.

In addition, this sculpture is also featured on Canada's twenty dollar bill. The item "Bill Reid Haida Sterling Silver Frog Brooch with Glass Lily Pad with Gift Box" is in sale since Tuesday, September 23, 2014. This item is in the category "Collectibles\Cultures & Ethnicities\Canada\ Aboriginal". The seller is "artfromabove" and is located in Vancouver, British Columbia. This item can be shipped to North, South, or Latin America, all countries in Europe, all countries in continental Asia, Australia.